U.S. home building rebounded in September on the strength of apartment construction, a category that provides less of an economic boost than single-family homes.

“The underlying pace of housing starts continues to grind higher,” RBS Marketplace economists wrote in a note to clients. But “it’s been a volatile ride led by a booming multifamily sector and a single-family sector that is inching up at a glacial pace.” 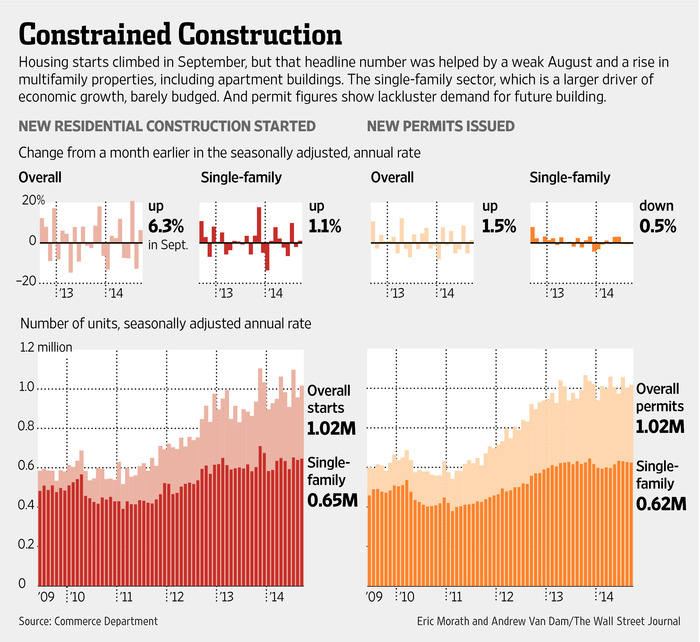 After a sharp fall early in the year, starts did rebound to match a postrecession high of a 1.1 million annual rate in July before slipping in August. Starts in August fell 12.8% from July, a slightly smaller decline than initially estimated.

Single-family starts remain down 9% from the postrecession peak established in November 2013. Starts of properties with five or more units, mainly apartment buildings, have increased 22.7% so far this year, compared with the first nine months of 2013.

That provides a lot less “bang for the buck given the smaller size and value of an average multifamily start versus single family,” said Morgan Stanley economist Ted Wieseman.

Newly started single-family units, roughly two-thirds of the market, rose just 1.1% in September. Permits for the category declined 0.5%. It has largely been a disappointing year for single-family construction, with starts up just 3.8% through the first nine months of the year, compared with the same period in 2013.

Heading into 2014, there was hope that better job creation and still historically low interest rates would generate demand for new homes. But a cold winter stalled construction and buyers gravitated toward a growing inventory of existing homes, which tend to cost less. Sales of previously owned properties had increased for four straight months through July before falling slightly in August, according to the National Association of Realtors.

Monte Hewett, chief executive of Georgia builder Monte Hewett Homes LLC, started 20 homes in September, slightly more than a year ago. Production was hindered, he said, by a shortage of lots ready for construction.

“We moved through a lot of our existing (lot) positions quicker than we anticipated,” Mr. Hewett said. “Our new lot positions are not quite in the ground yet.”

Still, there are some factors supporting a stronger finish to the year for home building. The labor market has added more than 200,000 jobs on average each month this year and the unemployment rate fell to 5.9% in September, the lowest reading since 2008.

Lower interest rates on mortgages could also boost demand for homes late in the year. The average interest rate on a 30-year mortgage fell to 3.97% this week, according to Freddie Mac . It’s the first time rates have fallen below 4% in more than a year.

But credit to buy a home is still difficult to attain for some consumers. “Mortgage credit really is, at this point, available really to those with pristine credit,” Federal Reserve Chairwoman Janet Yellen said last month.

Colorado home builder Oakwood Homes LLC started construction of 75 houses in its home state in September, up roughly 20% from a year earlier. Chief Executive Pat Hamill said he is seeing more entry-level homes under construction, but high prices are causing some buyers to balk.

“Pricing has expanded quite dramatically, and costs have, too,” Mr. Hamill said. “That’s kind of taken a little froth out of demand.”