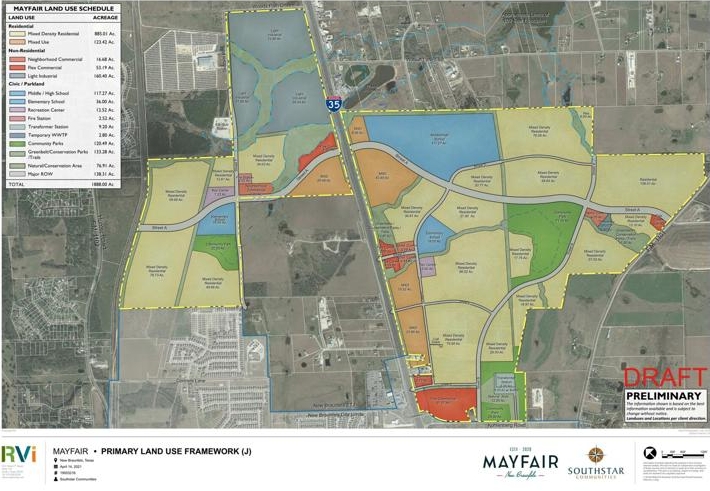 On May 13th the City of New Braunfels and SouthStar Communities will host a public information session on Mayfair, a new 1,900-acre proposed development in northern Comal County.

Mayfair will be SouthStar's fourth community development in Comal County, where the company is headquartered. Previous developments include Vintage Oaks, Havenwood at Hunter's Crossing and The Crossings.

The Mayfair project  proposes to add up to 6,000 new residential units to the area, over 300 acres of public parks, 4 new Comal ISD schools and commercial and a 160 -acre employment park.

While the project is located in the City's Extra Territorial Jurisdiction (ETJ) , a Development Agreement is warranted, as Mayfair seeks to establish a water improvement district (WID).

below is reprinted courtesy of the New Braunfels Herald-Zeitung

“The proposed WID is intended to have a mixture of residential, commercial and public uses,” Ferguson said. “The property is located outside the city limits, but the legislation authorizing the WID provides the city with the ability to enter the agreement in order to outline the city’s requirements for permitting and planning-level reviews, as well as the developer’s commitments to deliver project amenities and benefits that will serve the water improvement district and New Braunfels residents alike.”

Officials said negotiations with New Braunfels-based developer SouthStar Communities are nearing completion, and the city is seeking feedback from residents about the proposed development on property owned by the Texas General Land Office.

A public meeting is set for May 13 from 6:30 p.m. to 8 p.m. at Oak Creek Elementary School, located at 3060 Goodwin Lane, so residents can learn more about the proposed project and development agreement.

Following a presentation about the development, city staff members and representatives from SouthStar Development Partners will be on hand to answer questions.

Additionally, a virtual informational meeting will take place on May 17 from 6 p.m. to 7:30 p.m. Details on that can be found online at www.nbtexas.org/mayfair.

“If you look at what we have inside of the city limits of New Braunfels for industrial type development, we’re running out of land fairly quickly,” Jenke said. “This adds to that for industrial type use. The developer has also included some flex spaces as well as community parks inside of it and some hiking and biking trails, very similar to the Veramendi project. The Veramendi project has been very successful, so I think this will follow suit.”