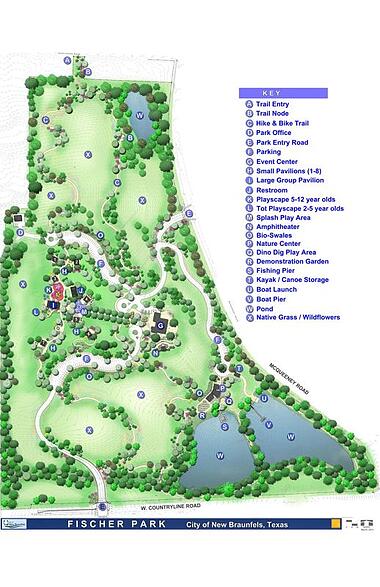 Exciting news for New Braunfels, home of Vintage Oaks, this week as the Fischer Park Nature Center received a funding boost and the Texas Wine Trail received a prestigious honor.

It was announced that supermarket HEB will donate $250,000 to the nature center facility at Fischer Park through a grant.

“The nature center facility at Fischer Park will be getting some extra attention after city officials announced Monday that HEB has given that project a 250-thousand dollar grant,” said KGNB. “New Braunfels Mayor Gale Pospisil tells KGNB News that HEB notified the city late last week that the nature center project at Fischer Park had been awarded that quarter of a million dollar partnership grant through their “Spirit of Giving” campaign where the grocery store contributes 5% of their pre-tax earnings to public and charitable programs.”

The nature center is part of the 62-acre, 8.8-million dollar Fischer Park project that “will be larger in size than Landa Park and offer a nature center, hike and bike trails, playgrounds, a splash pad, fishing ponds, picnic facilities, and an outdoor amphitheater,” said KPNG. The park is set to be finished by October 2014.

The Texas Wine Trail, long one of the darlings of the wine industry, just earned another honor. Wine Enthusiast magazine named the Texas region to its list of “10 Best Wine Travel Destinations 2014.”

“Everything really is bigger in Texas: It’s the No. 5 wine-producing state in the U.S., the Texas Hill Country AVA is the second largest in the nation and its most promising wines boast supersized flavors,” they said.

New Braunfels is no stranger to good news. The city continues to grow and thrive, with new residents and new companies moving in. Belk department store opened its 95,000-square-foot store in New Braunfels Town Center at Creekside in October.

Vintage Oaks currently has properties ranging from one to 14 acres in several neighborhoods, offering both gated and non-gated locations with wooded, cul-de-sac, and view homesites. Increased sales and continued buyer demand throughout the year have led to new property releases and neighborhood openings.