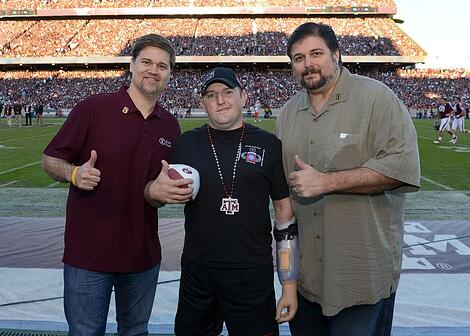 When Army Specialist Cody Nusbaum was surprised last week with a mortgage-free custom home at Vintage Oaks, it was an emotional moment for SouthStar Communities as well. The master-planned developer of Vintage Oaks, SouthStar has partnered with Operation FINALLY HOME on 10 mortgage-free homes built on donated homesites in SouthStar communities throughout Texas. SouthStar Communities is committed to wounded veterans, so every opportunity to help is as special as the last.

“Every time we get to see the look in the eyes of an American hero who has just found out he is being given a new mortgage-free custom home in a SouthStar Community, it’s just an incredible moment, said Thad Rutherford, Vice President of SouthStar Communities. “Knowing we are helping to make a difference in the life of an individual who has given so much to our country and being able to partner with a company like Operation FINALLY HOME (OFH), that only exists to make a difference in the lives of wounded heroes and their families, is so gratifying. We are grateful for OFH, and all of the other companies and individuals who donate their time, energy, effort, and resources to make these homes possible.”

SouthStar Communities has received recognition for its work with Operation FINALLY HOME. But ask Rutherford, and he’s quick to remind who the real heroes are.

“Cody has endured 75 surgeries to repair injuries he suffered while protecting this country, including a shattered hip, a broken calf, a severed femoral artery, and grenade fragments,” he said. “The incredible, inspiring wounded heroes chosen as recipients for homesites and mortgage-free homes in partnership with OFH at King Oaks and Lake Ridge--Sgt. Monte Bernardo at King Oaks, and Marine Sergeant Ken Kalish at Lake Ridge--both lost their limbs while serving our country. It’s a small thing we are doing for some very, very worthy individuals. SouthStar Communities is committed to wounded veterans, and we are just happy to be able to help even a little bit.”

It was during Sgt. Bernardo’s second tour in Afghanistan in 2012 that he stepped on an IED and was critically injured. As a result of the blast, both legs and his left hand had to be amputated. Marine Sergeant Kalish lost both of his legs above the knee and his left arm below the elbow, along with head injuries and severe shrapnel wounds, due to an IED during his second tour. CNN is documenting the building of Kalish’s mortgage-free home in The Sanctuary at Lake Ridge.

Progress continues on all three of these homes in SouthStar Communities. To find out how you can help, contact SouthStar Communities. OFH has also been chosen by the Newman's Own Foundation to take part in the "Honoring Those Who Serve Challenge." The challenge, which runs through November 11, offers the charity that raises the most money a $75,000 grant! You can make a tax-deductible donation here.

OFH, which was established in 2005 by 2010 CNN Top 10 Hero of the Year Dan Wallrath, has provided more than 40 homes to wounded veterans and widows of servicemen across the country.