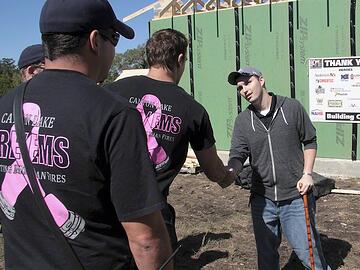 Cody Nusbaum was surprised this past weekend when a mortgage-free home was presented to him while volunteers and building crews worked on the framing stages. Vintage Oaks and Operation Finally Home have joined together with several local organizations to build a home for Nusbaum.

In 2011, while serving a tour of duty in Afghanistan, Nusbaum was shot by a Taliban insurgent.

“He got me from my calf to my hip and into my stomach through my back and I was in the hospital for four months straight,” said Nusbaum.

On the Kandahar Air Base, Cody was immediately taken into surgery. The surgeon said he stopped counting the gunshot wounds at 11 because they could no longer tell which was which.

It has been a long road to recovery for Nusbaum as he has been receiving medical treatment at the Brooke Army Medical Center (BAMC) in San Antonio since Aug. 29, 2011.

Doctors said he would never walk again, but he did after 75 surgeries.

While he’s on the road to recovery, volunteers in New Braunfels are making sure he has a place to call home.

On Sunday, they revealed to him the construction site of a new, mortgage-free house where Nusbaum can recover. 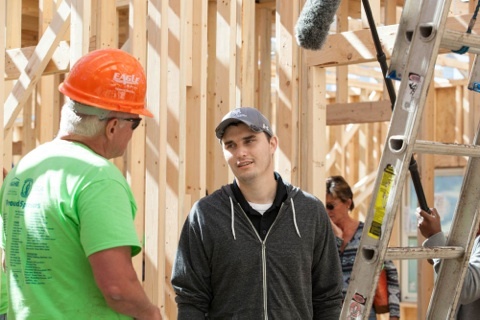 Today, the soldier stepped inside his very own house.

“It’s the best thing that’s ever happened to me to be honest,” said Nusbaum.

“It was such a blessing seeing Cody seeing his new house knowing he’s put his life on the line,” said volunteer Scott Ward from Shreveport, LA. “It’s touching being able to do something for him.”

Cody’s mother, Kim Nusbaum said having a home is a relief for the family.

“You are worried about what he’s going to do in the future so this is a big load off,” she said.

Volunteers plan to finish the house’s frame in three days and they hope to complete the entire home by February.

“I’m just thankful,” said Nusbaum. “I honestly don’t think I deserve something like this.”

Currently, Nusbaum is in a physical therapy program where specialists are teaching him to use his legs again. He continues to strive for his short-term goal of walking and maintains his long-term goal of a career involving sports and continuing his education.

This article originally appeared on KHOU.

Operation Finally Home comes to Vintage Oaks and we need your help. To participate, email info@southstarcommunities.com.