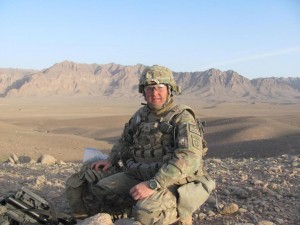 King Oaks, Bryan-College Station’s premier, master-planned community, has partnered with Operation FINALLY HOME and the Aggieland community to honor a wounded veteran with a mortgage-free, custom home in the King Oaks community. Sergeant Monte Bernardo of the 82ndAirborne Division of the United States Army was surprised with the announcement of his new home during half-time at the Texas A&M Military Appreciation game on November 17, 2012.

The veteran, who was awarded a Purple Heart and recognized for his service with several military commendations, was joined by representatives from the King Oaks community and Operation FINALLY HOME on Kyle Field for the presentation. The group was surrounded by the Fighting Texas Aggie Band as the surprise was announced in a pre-recorded message from Governor Rick Perry.

“Sgt. Bernardo has shown exquisite strength, courage and sacrifice in the name of our country,” said Dan Wallrath, founder of Operation FINALLY HOME. “His positive attitude and perseverance are an example for us all. We are blessed to be able to build this home for him.” 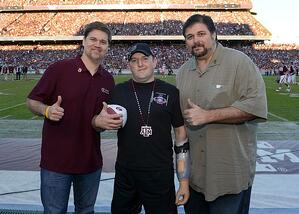 While serving his second tour of duty in Afghanistan, Bernardo was critically injured by an IED blast on July 4, 2012. The injuries he sustained resulted in the loss of three of his limbs, including both legs, which were amputated above the knees, and his left hand. He is currently undergoing treatment and working toward recovery at Walter Reed Medical Center in Bethesda, Maryland.

Wallrath founded Operation FINALLY HOME in 2005 to help wounded veterans, such as Sgt. Bernardo, by providing them with a mortgage-free, custom home. The homes are designed with the particular needs of the veteran in mind. In 2010, Wallrath was honored by CNN as a Top 10 Hero of the Year and has since taken the program national, with more than 40 homes built or under construction across the country.

“Sgt. Bernardo plans to study aerospace engineering at Texas A&M and has a brother who graduated from the university,” said Thad Rutherford, senior vice president of SouthStar Communities, which owns and develops King Oaks. “Because of his ties to the university, the Texas A&M Military Appreciation game was the perfect opportunity to honor Sgt. Bernardo with the announcement of his new home. We look forward to being able to welcome him home to the King Oaks community.”

King Oaks has provided the land on which the home will be built, and builders Mark Weber Custom Homes, Pitcock and Croix Custom Homes and Quinn Williams will be contributing materials and services to the effort.

Before even knowing his name, the Bryan-College Station community demonstrated their support for Sgt. Bernardo by providing donations for the home, including materials for the foundation, fireplace, garage doors and interior paint supplies and services. On October 11, King Oaks and University Title hosted a community kickoff event to foster community support and collect donations.

Those interested in supporting can register at AggielandVeteran.com or on the Operation FINALLY HOME Facebook page to receive updates and make donations.